ZAPRUDER FILMMAKERSGROUP –
ANUBI IS NOT A DOG 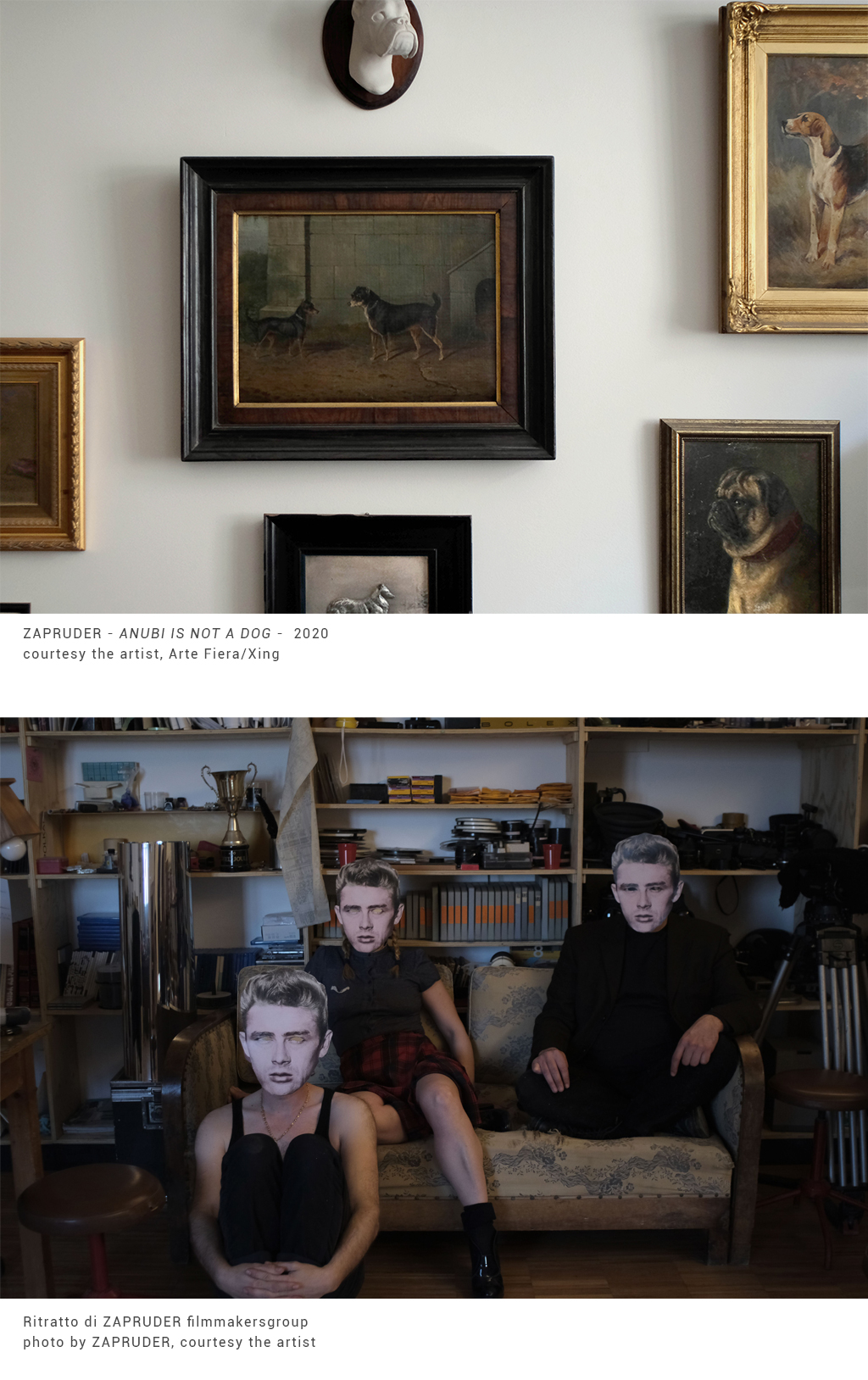 ZAPRUDER filmmakersgroup –
ANUBI IS NOT A DOG

This is conceived as a film set-performance in which, for the three days of the Fair, visitors could follow Zapruder’s work as it evolves from the preparation of the scene to the clapperboard, from warming up the guests to manipulation of the sound.

This is how the group’s new project has been launched at Arte Fiera, proliferating in multiple branches that will form a complex work: a film. Refined creators of new mythologies steeped in the present, Zapruder used the Sala Opera as a viewing device that emphasises the separation of the senses: hearing and sight will return different landscapes.

The project’s guiding image is a picture gallery whose only subjects are dogs. “This photo was taken in Helsinki in May 2019 and shows some works from the private collection of Kari J., a judge at dog shows, whom we met that very same morning in a bar made famous by the director Aki Kaurismäki. In fact, just a few hours after this photo was taken, we began putting together the parts of the ANUBI IS NOT A DOG project.”

The subject of this film in progress is the relationship of symbiotic affinity between dog and owner, between owning and being, between performance and play, in a continuous flow of mirrored images.

ZAPRUDER filmmakersgroup is a collective of italian filmmakers based in Romagna, founded in 2000 by David Zamagni, Nadia Ranocchi and Monaldo Moretti. The group experiments in the film field, on the border between figurative, performative and cinematographic arts, in the direction of a total visual experience. As in the case of Chamber Cinema: video-installation projects where cinema and object are fused together, drawing on the technique of stereoscopic film (or the illusion of three dimensions), as well as on expanded cinema. In 2011, Zapruder’s work received the 3D Persol Award at the Venice Film Festival. Among international filmf estivals and performing arts venues where Zapruder’s works have been presented: Rotterdam Film festival, Rome Film Festival, Kurtzfilmtage Oberhausen, Biennale de l’image en mouvement Geneva, Transmediale Berlin, Netmage Bologna, Centre Pompidou Paris, PAC Padiglione d’Arte Contemporanea Milano. Their video installation Zeus Machine/Salita all’Olimpo (Zeus Machine/The conquering of Olympus) was awarded the Premio MAXXI 2016. Producers, authors and directors of Zapruder’s projects are David Zamagni (Rimini, 1971) and Nadia Ranocchi (Rimini, 1973).