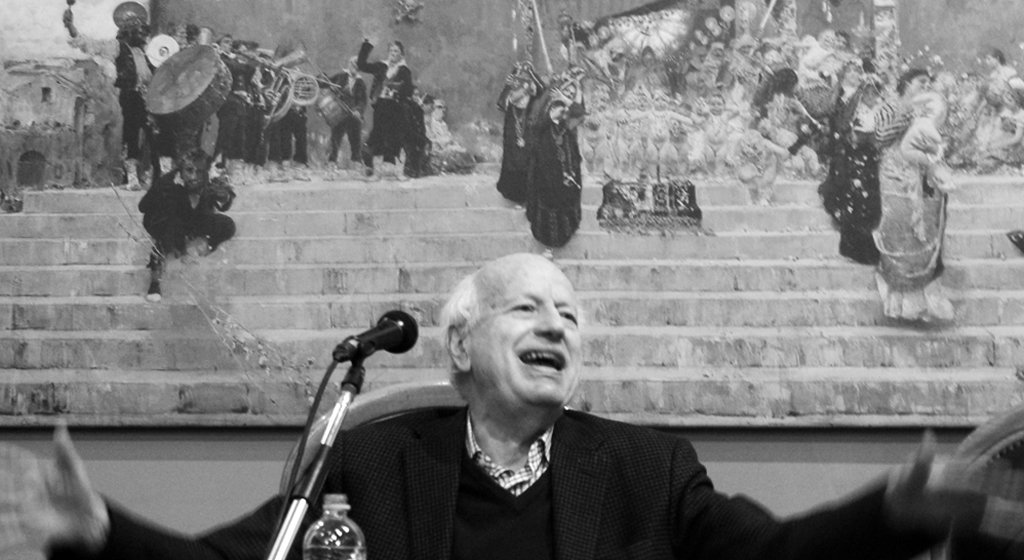 Renato Barilli was born in Bologna in 1935 and taught Phenomenology of Styles for many years at the DAMS course of the University of Bologna, where he is now an emeritus professor. In addition to aesthetics, his interests include both art criticism and literary criticism. For 25 years, the essential text for his teaching was 'Scienza della cultura e fenomenologia degli stili', recently re-issued by BUP, Bologna. He is the author of numerous books, including 'L’arte contemporanea' (Feltrinelli, Milan, 2005), 'Storia dell’arte contemporanea in Italia' (Bollati Boringhieri, Turin, 2007), 'Arte e cultura materiale in Occidente. Dall’arcaismo greco alle avanguardie storiche' (Bollati Boringhieri). His memoirs, 'Autoritratto a stampa' , were published by Lupetti, Bologna, in 2010. Blog: www.renatobarilli.it

My first encounter with Arte Fiera was in 1977, when the event was just a few years old. Giulio Cesare Alberghini, BolognaFiere’s wonderful director, invited me to organize a series of performances (I don’t recall whether it was my idea or his). He also offered to pay me 20 million lire (a considerable sum for the time) to organize it. The timing was perfect, because I had recently joined the PSI (Italian Socialist Party), which was entering a new phase led by Bettino Craxi and his associate Claudio Martelli, who had even asked me to become the head of visual arts at the national level. He later included me in the PSI’s Assembly, the one called, for reasons I’ve never understood, of “dwarfs and dancers,” whereas instead it included the era’s foremost intellectuals in the art field, with Paolo Portoghesi at the top of the list. The PSI had expanded locally as well, and applied the same method in many cities: the mayor was a member of the PCI (Italian Communist Party) but the spokesman for the arts was a Socialist, and I have to admit I took full advantage of this formula and organized a lot of shows in small Italian cities. But not in Rome, where I was obstructed by the arrogance and careerism of Bonito Oliva. Bologna followed the formula: Nino Colombari was in charge of culture, while GAM (Modern Art Gallery), then located conveniently in the Fair District, was in the hands of a member of the PCI, Franco Solmi, with whom I had argued fiercely, accusing him of being subjugated to an idea of “municipal art,” set up by an eminent intellectual like mayor Renato Zangheri but betrayed by his affections, which led him to give preference to artists of more less his age, such as Leonardo Cremonini and Dino Boschi, but also as a gesture to the illustrious presence of Sebastian Matta, who loved Bologna because it was the largest western city with a communist government.

Zangheri has to be given credit for commissioning the woefully neglected Leone Pancaldi to build the wonderful GAM, which in Pancaldi’s wide-ranging plan was to be only the first of two buildings: one to be used for temporary shows (a “Kunsthalle”) and a second one next to it for permanent collections (a “Kunstmuseum”). We have recently and rightly honoured the memory of Andrea Emiliani, but the same should be done to honour Pancaldi, who was the other pillar – in architecture – supporting Cesare Gnudi’s prestigious and effective authoritativeness. I always gave Zangheri credit for wanting to construct a new building for contemporary art, an idea that was then badly undersold by one of the worst mayors we’ve ever had: Walter Vitali, of the PCI. Afraid of not being re-elected, Vitali withdrew his candidature and paved the way for the victory of Giorgio Guazzaloca, the only right-wing candidate ever elected mayor in the city. Before leaving, Vitali had decided to sell GAM to BolognaFiere, and even included the Palazzo dei Congressi, considering it a good deal. GAM then moved to an ugly building, the former municipal bakery, from the 1920s. I’ll bet its recovery and restoration cost a lot more than what the City received from the sale of GAM (I’d just love to see the paperwork). The reason for this misguided transaction was that GAM was in the outskirts, although at least three quarters of Bologna’s population now lives outside the historical centre.

As I was saying, Franco Solmi, the director of GAM, opposed my performances and would never have let me use the space without a really good (even if reactionary) reason: my friend Colombari officially ordered him to let me use the large empty spaces, and we even found an appropriate way to present them: the first “International Performance Week” was held “at” and not “by” GAM.

We managed to pull off a miracle, organizing 50 performances in just 7 days in all of the Gallery’s spaces. I say “we” in undying memory of and gratitude to two younger friends, Roberto Daolio and Francesca Alinovi, who sadly are no longer with us. Without their help I would never have been able to handle such a large number of events. The performance project was repeated in subsequent years, gradually occupying larger and larger spaces. For example, in the second year, devoted to the “Post-Avant-Garde Theatre,” we occupied the entire Palazzo dei Congressi, from the lobby to the theatre. I don’t remember if we continued to receive funds from Arte Fiera or where the money came from (anyway, there was never enough), and we managed to issue a complete catalogue of the event with the publisher “La Nuova Foglio” of Macerata only at the end of the first Week The current management of MAMbo (heir to GAM) has recently re-published the catalogue in phototype.

It would be useless here to list the most memorable of those 50 events, but the most famous was certainly the one by Marina (Abramovic) and Ulay (Frank Uwe Laysiepen), who stood naked at the entrance to the Gallery, thereby forcing visitors to rub against them as they entered. A video camera amused the visitors who were already inside, letting them see the embarrassment of those who followed, who wondered whether or not they might/could/should touch the breasts or genitals of the two human guinea pigs. This performance was interrupted by a policeman (worthy accomplice of Franco Solmi) who, when I pointed out that female nudity was then accepted in both cinema and theatre, replied that it was lawful in places devoted to entertainment, and thus authorised to show the body “live,” but in museums the nude could be seen only if “dead,” in a photo or a painting. It was the gap between art that “represents” reality and a formulation that instead “presents” events live, and obviously performance art opts for this solution.

I’ll add that Alberghini, intelligent and open-minded, set only one condition: if a gallery exhibiting at the fair wanted to present one of its performance artists, we’d have to include him/her. We champed at the bit, worried we’d have to accept second-rate artists. But instead we were lucky, because one of the first exhibitors was the Holly Solomon Gallery in New York, who proposed Laurie Anderson with her electric violin, and so we were the first in Europe to be ecstatic (and to make the public ecstatic) over her performance in a room in GAM. Holly Solomon also proposed Bob Kushner, the leader of Pattern Painting, the American movement that confirmed the return of painting in those years, in the name of post-modernism. A few years later, we understood that we too had to evolve from a “naked” to an “ornate” performance. Luigi Ontani had shown the way back in 1977, dressed as a sleeping Endymion surrounded by a constellation of divinities projected on the walls of the Gallery’s main room. Getting back to Kushner, he had conceived of the idea of performing a striptease in reverse, i.e., starting out completely naked and then putting on clothes carefully arranged around him in a circle. Of course, the police prohibited this as well, and some officers were there to make sure that he didn’t commit the crime of indecent exposure. Apparently submissive, Kushner came out wearing the briefest of briefs, but at a certain point just couldn’t resist pulling them down and swaying his hips in front of the speechless officers.

After the performance season, my next project was the video-art yearbook, a summer show with a series of short videos by Italian artists, to be projected in sequence for a few hours at the Department of Visual Arts in the Santa Cristina complex in Bologna. I tried to make the public aware of the project, but wasn’t very successful. I had asked the Palazzo del Congressi, managed by BolognaFiere, permission to use a room in the former GAM to present a summary of our show, but I obviously couldn’t expect the Fair’s visitors to return in the evening. So I tried to catch their attention as they left the halls. But tired, hungry, and with rather traditional tastes, they completely ignored my invitation and swarmed away without watching our videos.

On the other hand, Art City, with countless events offered during recent editions of Arte Fiera, gave me a wonderful opportunity. As known, every year since 2011 I’ve brought back one of the featured artists of those glorious Performance Weeks in the framework of new editions of Arte Fiera, choosing Friday night and naturally beginning with Marina Abramovic. I received funding from Bologna University’s Unibo Culture programme, which, for Marina’s performance, offered me the Great Hall of Santa Lucia, with a limit of 750 seats for safety reasons. It was an incredible success. Completely sold out and with a riotous crowd outside trying to force its way in. So in this case as well (but for much different reasons), the police had to intervene to maintain order. Later, when the University no longer offered me that space, the City came to my aid by letting me use the Sala Borsa (the main public library in Bologna), where many performances were given. Two years ago, this space was closed for renovation, and we moved to a visual arts laboratory in the University’s Arts Department. Funding from Unibo Culture has recently ended as well, so now we’re getting by with help from the Department plus whatever I myself can add to our very lean budget. 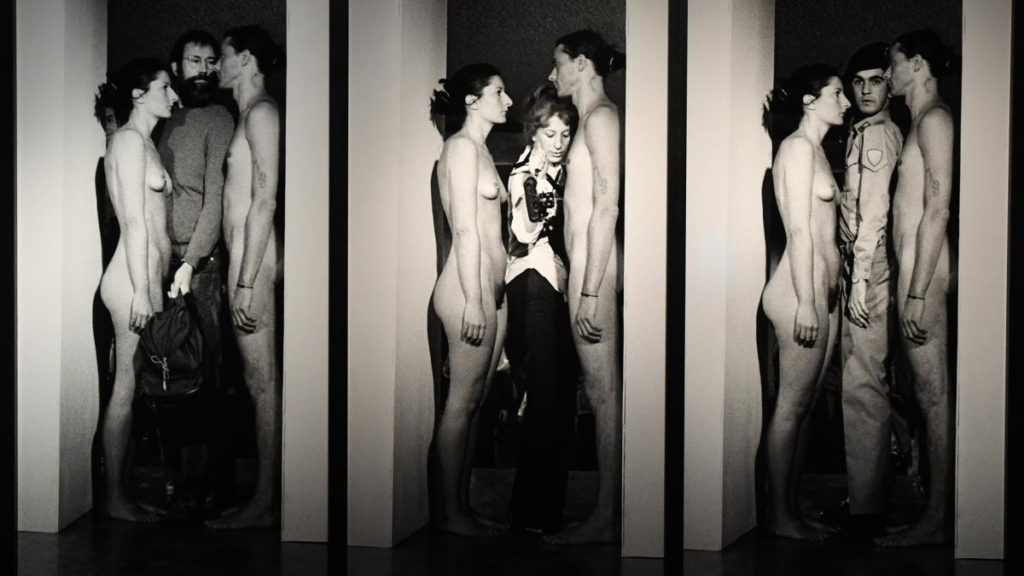