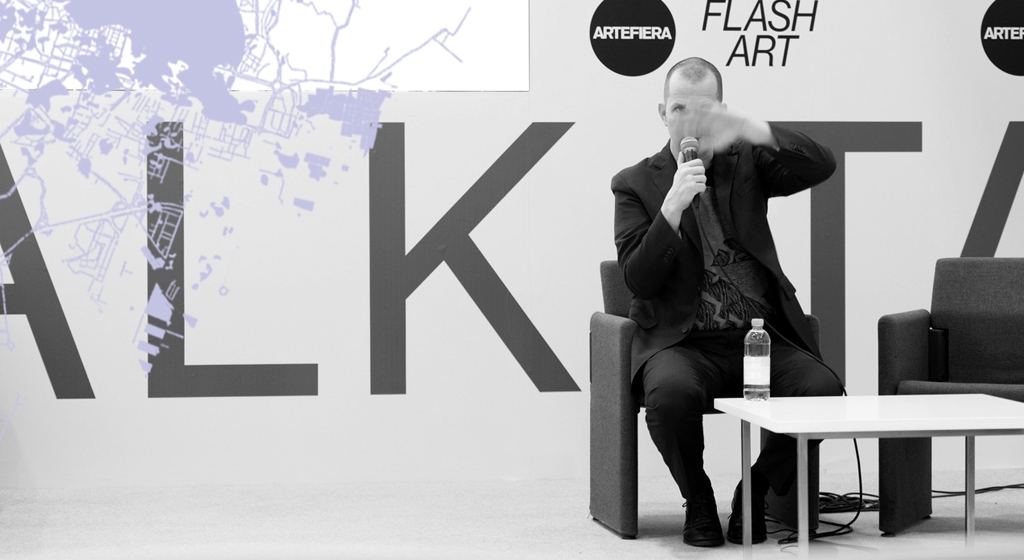 Alessandro Bosetti (b. Milan, 1973, living in Marseille) is a composer and sound artist who, through multiple forms and fields, has expressed his passion for the sound of speech and for the voice understood as an independent object and expressive instrument. His works create a dialogue among language, voice, and sound within complex tonal and formal constructions, traversed by sly irony. Bosetti creates surprising pieces that question aesthetic categories and customary ways of listening. He was one of the threemain contributors to Oplà. Performing activities at Arte Fiera 2020.

For three days at Arte Fiera, I tried to ignore the exhibited works and concentrate instead on the shadows that surrounded them.
For a few hours each day, I conducted short interviews with a large number of people, asking each one to find a shadow (near or far, big or small, present or remembered, etc.) and describe it.
I instinctively eliminated the specifics of the works from my field of view so that I could focus on the fleeting universality of the shadows. For three days I lived in an infra-world that was more auditory and imaginary than visual, made of voices, shadows, and more-or-less ephemeral relations between strangers.
You can see examples of my exploration on the instant podcasts of L'Ombra.

In this state of intentional distraction, the only work that grabbed my attention and stuck in my memory was a video of Mattin’s performance “No No Nono No NO!” at the Teatro Manzoni on opening night of the 2015 concert season.
The video was presented in the show “L’opera aperta (The Open Work)” and documents a performance held in the theatre lobby before the performance of a piece by Luigi Nono.
“No No Nono No NO!” was the first part of the evening’s programme, but most of the viewers thought it was a curtain-down prelude that annoyingly delayed the start of the real concert.
The video camera – and a powerful light source – are aimed at the audience, in which there are also a few performers who occasionally stand up to say slogans, fragments of texts, or other vocal interjections.
The composition proceeds by germination, starting from that collage, which acts as a sonic catalyst.
The audience reacted immediately and resembled that of the audience at the historic performance of John Cage’s Empty Words at the Teatro Lirico in Milan in 1977. First a few isolated protests, followed by an explosion of all kinds of expressions that are hard to make out on the recording but that must have had a fantastic spatial effect in the context of the theatre.
Today, Bolognese audiences are more similar to early-20th century audiences that attended futurist performances than Milan audiences in the years of student protests, but nevertheless, the sonic energy generated is just as powerful.
I’m really not so interested in the polemical tone of the situation (even if it gives the work a wonderfully comic character).
“No No Nono No NO!” went straight to my love of polyphonic vocal music and I couldn’t help but watch it and listen to it, and I kept thinking about it for days. Mattin’s piece was a perfect example of contemporary vocal counterpoint and satisfied my personal interest (or obsession).
Vocal polyphony for a large number of independent voices reached its peak in the late Renaissance: Alessandro Striggio’s Missa sopra Ecco sì beato giorno (1565) uses from 40 to 60 independent voices (!). Thomas Tallis’s canon Spem in alium uses 40. Janet Cardiff used Spem in alium in a fascinating installation that separated the individual voices by giving each one a different loudspeaker, letting the listener walk through the folds of the polyphony (Forty Part Motet, 2001).
These were followed in the early 17th century by numerous madrigal masterpieces, including ones by Gesualdo da Venosa and Luzzasco Luzzaschi, gradually moving toward greater independence and expressiveness of individual voices immersed in a complex conversation.
Back in Luzzasco’s days (and later in Bach’s), this entangled fabric was made compact and interesting by recent developments in tonal harmony.
Then, just as now, the essential question was: how can I listen to more than one thing at the same time?
Do I focus on just one thing or on many?
Tonal harmony offers a solution (or a compromise): you rely upon the relationship between consonance and dissonance, letting your attention ebb and flow between the whole and the parts, freely contracting and relaxing, but always guided by a sense of harmonic consistency.
Tonal counterpoint is full of rules: this is allowed, this isn’t, parallel fifths and octaves are prohibited, you have to avoid more than one leap in the same direction, etc.
These days, I see and listen to contemporary contrapuntal objets trouvées such as politicians in multi-voice brawls on television or friendly conversations at a meal with everyone talking at the same time. They all lack tonal consistency, and the direction of the energy flow ensures the endurance of the counterpoint.
You listen laterally, translate simultaneously, divide and multiply thinking-while-talking-while listening. The multiplicity of voices and meanings blooms and makes the world bloom.
Mattin’s wonderful NO offers this kind of brilliant exploding polyphony. A powerful contemporary madrigal, with largely improvised parts, dominated by male voices (alas!) interwoven in very close polyphony, and all in a range of just less than three octaves. The voices leap suddenly from whispers to screams, spin on complex rhythms typical of spoken invective, and create fleeting links among points in space, responding to one another in a thousand different shades. The tension you feel no longer derives from dominant versus tonic, but instead from an infinitely prolonged “when does it end??,” which, if you think about it, is a much more honest existential question.
All of the voices are completely independent, and the perceptive split of the axes “spoken-sung” and “near-far” amplifies the polyphonic plasticity and depth.
“No No Nono No NO!” is a chorus, social body, composite organism, living crèche, community (not important if it’s peripheral or central: every organism creates its centre), an interweaving of vocal lines resting on nothing.
When I watch children play, I’m always amazed by their total concentration and involvement: they are completely focussed on here and now.
They possess the maximum plasticity plus the maximum directionality, and energetically express their right to transform multiple into single.
In the same way, Mattin’s single, monophonic eye/ear – his insolent beam aimed at the audience – channels the mad swarm of impossible polyphony and sublimates the widespread slavery of adults to multitasking in a fertile ecstasy of listening. 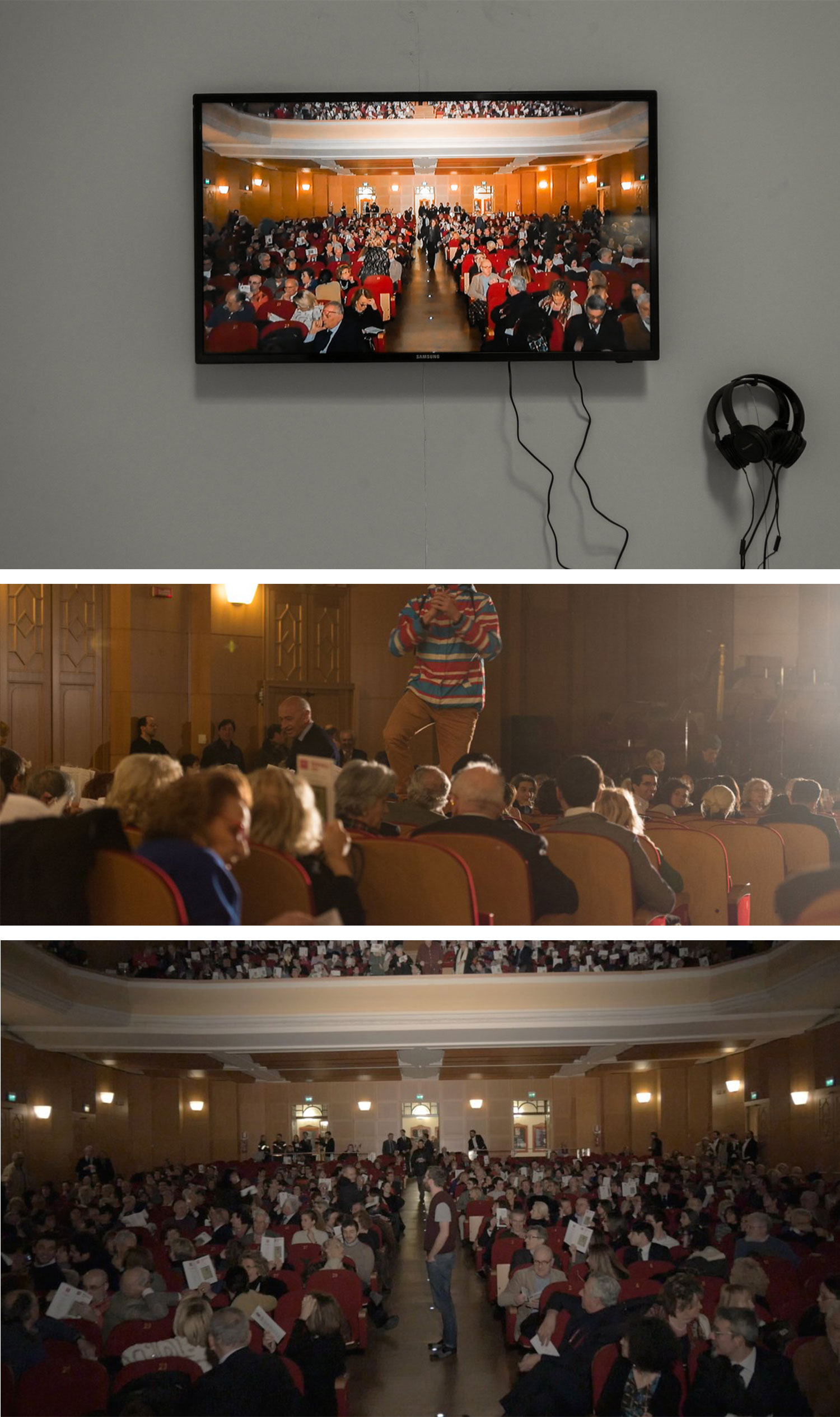 Images from the performance No No Nono No NO! by Mattin at the Manzoni Theater in Bologna, 30 January 2015
Photocredit: Luca Ghedini