Degree in Law, Professor of Administrative Law at Bologna University. Rector of Bologna University from 1985 to 2000. During his term as Rector he modernised the University and also conceived and created the Magna Charta Universitatum. He promoted and inspired the “Bologna Process,” for which all European Ministers of Education met in Bologna in 1999 to launch new University Courses of Study, to ensure the equivalence of education degrees in the various countries, and to guarantee the free exchange of European students and graduates. The meetings led to the writing of the “Bologna Declaration,” signed by 29 European nations on 19 June 1999.
From 2001 to 2013 he was the Chairman of the Cassa di Risparmio di Bologna Foundation as well as Chairman of “Museo della Città di Bologna S.r.l.,” which manages and coordinates the artistic-museum complex “Genus Bononiae-Musei nella città”. He has been the Chairman of Bologna’s Academy of Fine Arts since 2013.

There is a place in Bologna that is especially dear to me, a place that has always filled me with wonder, a sense of the sacred, and beauty ever since I first entered it: the Church of San Colombano, which in 2020 will celebrate the tenth anniversary of its reopening.

I still remember the sense of incredulity that struck me the first time I saw it: a site full of artistic beauties that preserves an authentic masterpiece – the 13th-century fresco attributed to Giunta Pisano – absolutely had to be given back to the city. I immediately decided to do everything possible to acquire it and make it available to everyone through Genus Bononiae.

Today, the San Colombano Museum is made even more precious by the famous Tagliavini Collection, one of the world’s largest collections of antique musical instruments and a reference point for Bologna’s cultural elite. Nevertheless, my real wish is for it to become a space known and loved by everyone, including – and especially – young people, so that they may discover the most authentic marvels of our city and may approach and fall in love with art.

We have been doing this for ten years: in 2009, when the Library of Art and History opened in the former 16th-century church of San Giorgio in Poggiale after its painstaking restoration financed by the Fondazione Cassa di Risparmio in Bologna, we launched our plan for a museum spread throughout Bologna’s historical centre.

A unique museum route, consisting of 6 sites in the city centre, with different and multifaceted cultural proposals and yet consistent as a whole: the San Giorgio Library, which stores the Foundation’s enormous literary heritage; Palazzo Pepoli, the Museum of the History of Bologna: an interactive instalment presenting 2500 years of the city’s history, from Etruscan Felsina to today; Palazzo Fava - Palazzo delle Esposizioni, the building that contains the first large fresco cycle by Annibale, Ludovico, and Agostino Carracci and the site of major international exhibitions; the former Church of San Colombano, whose cornerstone was laid by Pietro, Bishop of Bologna, in the 7th century; the Oratorio and Church of Santa Maria della Vita, with the majestic Lamentation Over the Dead Christ by Niccolò dell’Arca, an unmissable destination for anyone visiting the city; lastly, Casa Saraceni, one of Bologna’s most elegant Renaissance buildings, now the headquarters of the Carisbo Foundation.

Although this decade is about to end, a new one is about to begin, with experiments aimed at involving an increasingly younger population, with a tribute to pop culture (such as the large show devoted to Bonvi); the use of multimedia technologies, with the interactive show on Vivaldi and the new hall in Palazzo Pepoli offering a virtual tour of the present and future of Bologna; a focus on today’s most critical issues, with the Planet or Plastic exhibit in Santa Maria della Vita, produced in collaboration with National Geographic.

2020 will be the year of an ambitious project, carried out with tenacity thanks to the collaboration of 9 international museums: 550 years since its creation and almost 300 since it was dismembered, the Griffoni Polyptych by Francesco del Cossa and Ercole de’ Roberti, one of the greatest Italian Renaissance masterpieces, will once again be seen in its entirety, demonstrating the centrality of Bologna in the Renaissance period. While awaiting the inauguration on 12 March, Palazzo Fava honours the frescoes of the Carracci family and its pupils on the piano nobile, along with thirty works of contemporary art from the Foundation’s vaults: proof that art can break down the barriers of space and time by offering values that are simultaneously historical and universal. 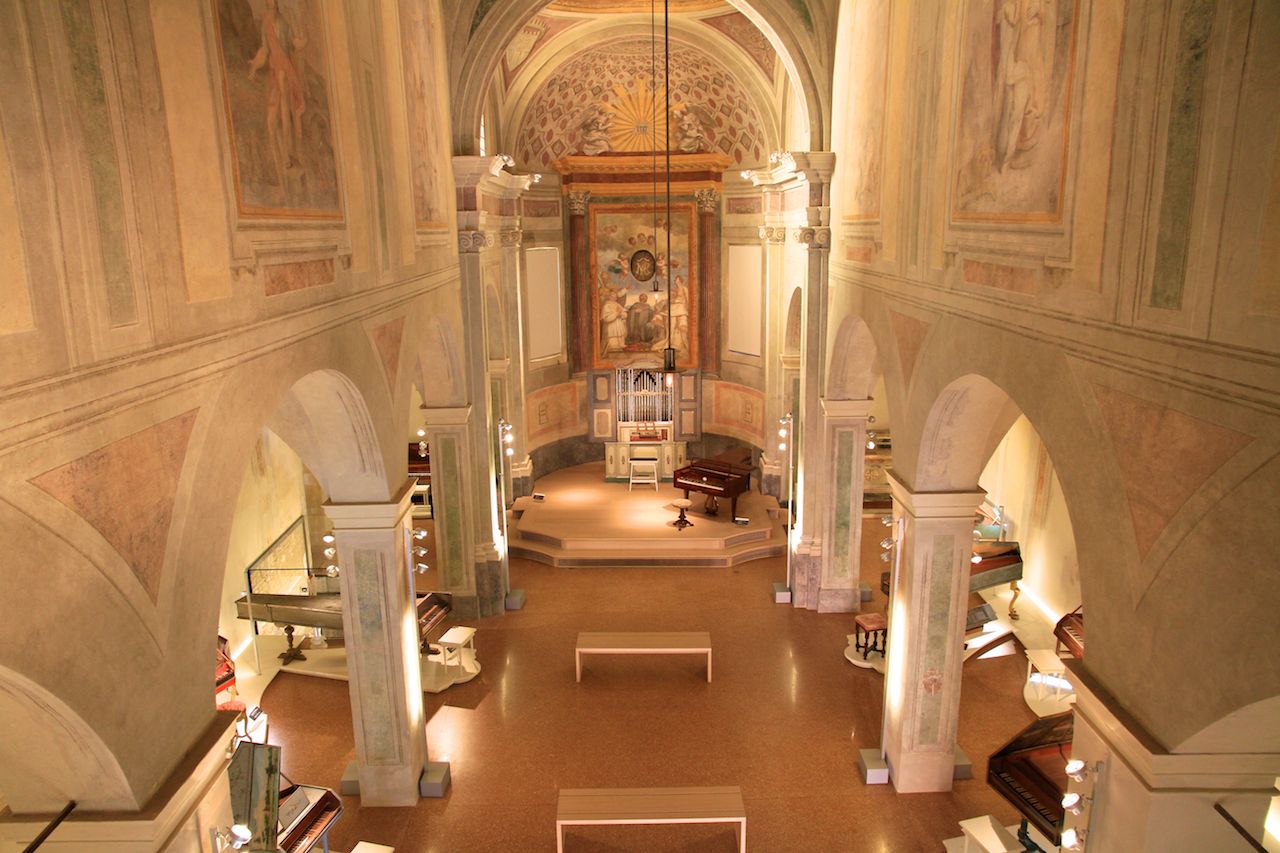 Church of San Colombano: view from the choir